From the Mountains to the Mediterranean

HomeArticles to read From the Mountains to the Mediterranean

Italy – a country of contrasts. From the sparkling coastal waters, the fertile farmlands roll gently away towards the wild Apennine mountains reaching jaggedly toward the sky. 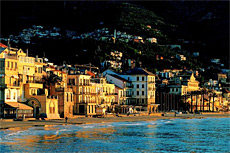 Few countries in Europe can offer such breathtaking scenic contrast as Italy. From the sparkling emerald waters of the San Reno Riviera, one of the continent’s most famous stretches of coastline, to the snow-covered slopes of the Alps and Dolomites where tourists flock in droves, the dramatic and varied landscape never ceases to astound and enchant the visitor.

The prosperous north is home to some of the highest mountains in Europe, their brooding Alpine peaks watching over the gently terraced hillsides as they tumble away towards the great plains of the Po Valley, a huge expanse of fertile flatland that leads down to the gentle Adriatic coast.

Lake Como, sheltered between steep, protective mountains, is the said to be the most beautiful of the Italian lakes. The clear deep waters, the deepest of any lake in Europe, are edged by elegant villas and spectacular tropical gardens that flourish in the humid microclimate created by its huge expanse of water.

Lake Garda is undoubtedly the most famous of the lakes – a luxury destination where the warm, fertile land rolls gently away from the dominant Trentino mountains towards the rambling vineyards and stately lemon groves that lead down to the ancient city of Verona.

One of the largest lake islands of Europe lies on Lake Iseo. Formed by the Valcamonica Glacier and 24 kilometres long, the area has escaped the attention of the glossy travel brochures and is thus untouched by mass tourism. This is a spot where one can still relax and enjoy the natural beauty of the countryside.

The flatlands are rich in agriculture where a delightful blend of grazing pastures and fields of corn, rice and flax soak up the summer sun. 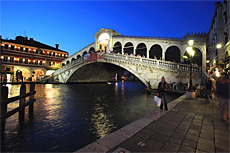 The Po River joins the sea just south of Venice, a city of history and romance and unlike any other in the world. Lying cradled in a sheltered lagoon, the city is built entirely on water where motorised boats and the famous gondolas move people and goods around the city where ancient bridges cross the canals and lead those on foot towards bright open piazzas, often dominated by splendid medieval churches.

To the west is the Riviera, a playground for the wealthy and where the coastline of beaches has a magnificent backdrop of high mountains that extend as far as to the sea. Sheer cliff faces plunge straight into the deep turquoise waters between coves of warm sand overlooked by ancient villages hugging the hillsides.

The northern part of the peninsula – Italy’s boot – offers the visitor a scenic feast of snow-capped mountains, lush countryside, babbling rivers, small open plains, and the coastlines of the Mediterranean Sea to the west and the Adriatic Sea to the east, both of which boast some of Italy’s finest beach resorts. It’s here that the tiny, independent republic of San Marino lies sheltered by Mount Titano to its east and just 20 kilometres south-west of Rimini.

Middle Italy offers gentle climate where warm breezes wash across the rolling hills surrounding the Tuscan Apennines. The unique landscape with cool pine and chestnut woods rich in truffles and mushrooms, green fertile plains and pleasant olive groves is punctuated by a host of small towns and villages, each with its own unique character. This is inland Italy at its rustic best.

To the west lies Rome, Italy’s capital and largest city with a vibrant and cosmopolitan atmosphere that’s surrounded by glorious countryside stretching from the central mountainous backbone of the peninsula to the beach lined fringes of the warm Mediterranean.

The modest inland city of Frosinone is known for its thermal springs making it a popular tourist destination amongst Italians and European day-trippers alike.

Moving south, the Apennine mountains gradually lose their raging dominance as they being to slope gently down to meet the rolling farmland that lead to the flat coastal plains surrounding Naples in the west.

The southern landscape consists of huge expanses of cool, untouched forests, mile after mile of olive groves, and, right down in the “heel of the boot”, volcanic hills surrounding tiny, isolated marshes. This is Italy’s wildest landscape, densely forested and sparsely populated and home to a thriving population of bears and wolves.

The southern tip is yet another area of extreme contrast. Huge expanses of beach dominate the coastline of the west while the eastern coast is rocky and wild with caves and isolated coves sheltering small sandy beaches. 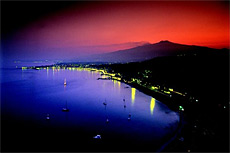 Europe’s most famous volcano, Mount Etna, rules Sicily’s landscape, an island of volcanic mountains and lava fields that projects out of the clear Mediterranean water just 3 kilometres from mainland Italy. Sardinia, Corsica, Elba and the smaller island of Capri, little more than a jagged rock in the azure water, all have their own unique characteristics and attract their individual groups of loyal visitors.

With such varied natural treasures within the boundaries of a country that covers little more than 300,000 square kilometres, it’s hardly surprising that over half a million visitors flock to Italy every year. They’re the connoisseurs of beauty, tranquillity and diversity. They know what they want and where they can get it.