Campervan Pamplona Spain have Motorhomes and RV rental in Bilbao,San Sebastian and Santiago de Compostela. Check out our Top Motorhome Tips for hiring a Campervan as it will answer many of your queries which may be on your mind.

Pamplona is the capital city of Navarre, Spain and of the former kingdom of Navarre. The city is famous worldwide for the San Fermín festival, from July 7 to 14, in which the running of the bulls or encierro is one of the main attractions. This fiesta, known as Sanfermines to the local population, was first brought to widespread attention by Ernest Hemingway.

The festival of San Fermin, or the Pamplona bull running as it’s more commonly known outside Spain officially begins at midday on 6th July every year with the ‘chupinazo’ which takes place on the balcony of the Casa Consistorial in Pamplona. Thousands of people congregate in the square awaiting the mayor’s official announcement that the fiestas have begun, a rocket is launched and the partying begins. 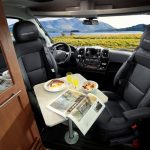 Pamplona is linked by motorways with neighbouring Zaragoza,San Sebastián, Vitoria and Logrono . Since 2007 buses use a new bus station in the city centre that replaces the old one . The airport  operated by Aena and located in Noain, schedules several flights daily to Madrid and Barcelona. There are railway links with Madrid, Zaragoza and northern Spain, operated by Renfe.

Here are some useful links for holiday in Pamplona, Spain: