Boston Motorhome RV Hire is available from Boston Massachusetts with a selection of Campervan and RV models to suit all requirements.

Boston, with an estimated population of 600,000, is the largest city in New England, a region in the northeast of the United States comprising the states of Maine, New Hampshire, Vermont, Massachusetts, Rhode Island and Connecticut. 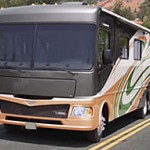 Boston Motorhome RV Hire has vehicles for hire and also for one way trips across the USA these rentals are all on request so contact us early 6 months in advance is recommended.

Boston was founded in 1630 by Puritans fleeing religious persecution in England. It trapidly rose to prominence as the premier trading and shipping port of the New England region, fueling the rapid development of the northeast USA.

Much of the city was destroyed by fire in 1760, but it was rebuilt within a few years. Boston featured prominently as the central city for revolutionary activity during the American War of Independence, with several of the early incidents in the war occurring here, including, famously, The Boston Tea Party. It’s involvement in the events of the war earned the city the nickname The Cradle of Liberty.

Boston has a varied climate, ranging from hot and humid in the summer to cold and snowy in the winter. It’s position right on the Atlantic Ocean also affects the weather, producing much snow and rain during the winter months. It can reach a balmy 82°F (27°C) in July, and June and August are also usually nice and warm.

One of the major attractions for Boston is the annual Fall foliage, when the leaves on the trees all start to turn to beautiful shades of gold, russet and red. The sight is truly spectacular, and one not to be missed.

Take a cruise on the harbor with Boston Harbor Cruises, who organise trips including whale watching, private charters, special events and more.

Boston is home to the John F. Kennedy Presidential Library & Museum, where you can learn about this most iconic of Presidents. The museum portrays the life, leadership and legacy of President Kennedy, conveys his enthusiasm for politics and public service, and illustrates the nature of the office of the President.

One of the most comprehensive art museums in the world, the Museum of Fine Arts, calls Boston it’s home. With an ever changing schedule of exhibits (more than 20 in 2007!), there is a staggering amount of fabulous art to indulge in. The museum is also home to a fabulous collection of over 450,000 objects from around the world, with some of the rarest and most important artistic treasures in the world.

There is also the Harvard Museum of Natural History, where you can see everything from Dinosaurs to Meteorites, Minerals & Gems to an exhibit on Climate Change: Our Global Experiment. The Museum also boasts the first Triceratops Dinosaur fossil ever found!

Yet another museum is the Museum of Science, which celebrates science and technology, and it’s importance in our daily lives. The museum also boasts an IMAX theater, a Planetarium, and Laser shows. There is a huge list of ever changing events and activities – you are not going to be able to see everything in one day.

For the kids, don’t miss The Children’s Museum, which is actually the second oldest in the country. It features lots hands-on exhibits to teach children all about the world they live in, such as Construction Zone, Boats Afloat, Science Playground and the Japanese House.

Boston has a rich sporting heritage, with major league teams in Baseball, Football, Basketball and Hockey. One of the most famous baseball parks in the world, Fenway Park, is home to the world famous Boston Red Sox, winners of 7 World Series titles. The New England Patriots play American Football out of Gilette Stadium, and since being established in 1960, have won the Super Bowl 3 times.

Boston is represented in NBA Basketball by the Boston Celtics, who have won 16 NBA Titles since their formation in 1946, and the Boston Bruins are the city’s Hockey team, with 5 Stanley Cups to their name.

Boston Motorhome RV Hire also hires for the Boston is also home to the Boston Marathon, a world famous athletic event, held every year on Patriots Day in April.

Boston is served by Logan International Airport, located in East Boston. The airport is only a few kilometers from downtown. Interstate I-95 runs north-south, circling the city to the west and linking the city to New York to the south, and Interstate I-90 heads west towards Cleveland, Chicago and on into the rest of the United States.

Little known fact about Boston – The Boston University Bridge on Commonwealth Avenue in Boston is the only place in the world where a boat can sail under a train driving under a car driving under an airplane!