New Zealand is a spectacularly beautiful country and local knowledge is invaluable when looking for the local beauty spots. New Zealand has a network of 80 Visitor Centres or I-Sites. They provide objective information on subjects like: accommodation, transport, attractions and activities, itinerary planning, places to eat, local events and entertainment, and maps and guide books.

For more detailed information on the area that you are visiting contact the local I-Site.
www.i-site.org

National parks on the North Island; Te Urewera National Park, Tongariro National Park, Whanganui National Park and Egmont National Park.
There are also hundreds of Land and Marine Reserves. These Parks and Reserves are managed by The Department of Conservation and information on all of them is available from their website… http://www.doc.govt.nz/

Just for a taster…

Te Urewera National Park – Te Urewera National Park lies between the Bay of Plenty and Hawke’s Bay in the North Island of New Zealand. The nearest towns are Whakatane, Murupara and Wairoa. Remote, rugged, immense, the Park is famous for its lakes and forested beauty as well as its stormy history. In the southern part of the park lie two of the park’s treasures, Lakes Waikaremoana and the smaller Lake Waikareiti. As much of the park is remote and not easily accessible this has helped protect much of the park’s native wildlife. Te Urewera is unique in that it contains a full complement of North Island native forest birds.

Browns Island (Motukorea) – Motukorea lies a short distance offshore from Auckland’s eastern suburbs. One of the best-preserved volcanoes in the Auckland volcanic field, it erupted between 10-20,000 years ago.
The island has been an important part of Auckland’s early history. Historic sites cover much of the island and include Maori pa sites, gardens and settlements, in some cases several hundred years old. Other sites are associated with early European settlement.
Google Earth Co-ords – Lat: 36°49’52.96″S – Long: 174°53’39.84″E 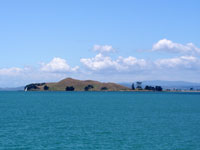 Reserve – The reserve is about 20 km north of the centre of Auckland. The Long Bay-Okura Marine Reserve protects a stretch of coastline on the east coast just north of Auckland city. It is moderately sheltered, and largely formed of Waitemata sandstones and mudstones. Formally established in 1995, the marine reserve includes a variety of coastal habitats: sandy beaches, rocky reefs, estuarine mudflats and mangroves.

New Zealand is a spectacular land shaped by cataclysmic events. The volcano cones that punctuate the countryside mark where the earth’s molten interior has burst through cracks in the thin crust. The country straddles the collision zone where the Indian and Pacific tectonic plates meet at the southern point of the ring of fire.

of a large volcanic field that has produced around 53 volcanic scoria cones in the last 140 thousand years. Wherever you are in Auckland, a green volcanic cone is never far from view.
Maungawhau, is the highest of all at 196 metres. It has an oval base caused by three in-line craters.
Maungakiekie, was home to one of the largest Maori settlement structures in New Zealand and included three pa sites. Terracing and pits can be found all over the cone. The mountain has been a reserve since 1840. Today they offer an extensive recreational area for visitors and the residents of Auckland. With walking tracks, glades of forest, picnic areas and paddocks of sheep and cattle, there is delightfully rural feeling to this inner city enclave.

sneaky threads of steam drift upward from parks, riverbanks and drains. The unmistakable scent of sulphur wafts through the air and geysers of boiling water roar from the ground and pools of bubbling mud gurgle and belch. Geothermal and volcanic activity have sculpted the landscape in every direction. The many beautiful lakes are water-filled craters from violently explosive eruptions. Giant sleeping volcanoes rise all around and gently oozing lava has created conical hills and islands. Silica terraces and the edges of ponds have been beautifully coloured by minerals extracted from deep inside the earth by the rising superheated water and steam. 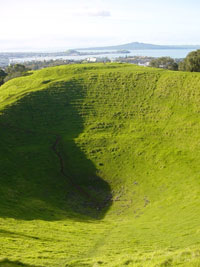 You can explore these areas on your own or take a guided tour. There are many and varied tour operators. We have an example below…

Fullers Auckland – Rangitoto Island Explorer
Ferry Building, 99 Quay Street, Auckland
Discover Auckland’s volcanic icon – Rangitoto Island. A 30 minute cruise from Auckland takes you to Rangitoto Island. You’ll be greeted by your guide, and board the 4WD road train. The road train will take you on your fully commentated safari to the summit and allow you to take in the spectacular views.
This is a cruise and volcanic explorer package 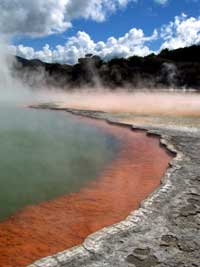 Get out of the driver’s seat and enjoy walks in Auckland’s beautiful conservation areas. The Department of Conservation has all the information you could need to find and follow the walking trails to suit you. There are hundreds of walking opportunities on conservation land throughout New Zealand. These offer a variety of recreation opportunities to people of differing ability to explore New Zealand’s natural, cultural and historic heritage 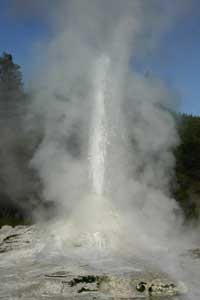 of other recommended scenic places to visit?… There is so much to see.